I recently posted about the upcoming Fall conference of the Canadian Evangelical Theological Association (CETA), which will be held on October 3, 2015 at Tyndale University College and Seminary in Toronto.

Although the Call for Papers is closed, registration for the conference is now available online at the Tyndale website.

CETA members receive an extra discount equal to half their  membership dues. Registration for student members is discounted by $10.00 and registration for regular members by $20.00.

Since CETA membership comes with a subscription to the Canadian Theological Review, this is a great deal (and since the journal is a bit behind publication schedule, current members will receive more than a year’s worth of issues).

I hope you will consider attending the conference if you are able.

The Canadian Evangelical Theological Association (CETA) will hold their next Fall theology conference in Toronto, on October 3, 2015.

Every year since 2012 CETA has been co-sponsoring a Fall theology conference with a different theological institution, in order to promote serious theological reflection between younger and more established scholars in the broad area of theology (including biblical studies, dogmatics, history, ethics, ministry, etc.), for the sake of the Canadian church.

Previously, the CETA Fall conference has been co-sponsored with McMaster Divinity College (2012), Northeastern Seminary (2013), and Wycliffe College in connection with the Institute for Christian Studies (2014).

This year, the CETA Fall conference will be co-sponsored with Tyndale University College and Seminary, the largest theological school in Canada, on their new Bayview campus.

Because the Call for Papers went out a bit late this year, the CETA executive have extended the deadline for paper proposals until July 25.

The keynote speaker will be Dr. Las Newman, president of the Caribbean Graduate School of Theology, in Kingston, Jamaica. Dr. Newman holds a PhD in church history from the Oxford Centre for Mission Studies. He is an alumnus of Tyndale, and received an honorary doctorate from his alma mater in 2013.

The theme for the Fall CETA conference will be Global Evangelical Theology. Papers that attempt to make a connection to this theme are especially encouraged.

Lest you think that the advertised theme excludes your idea for a paper, Global Evangelical Theology is being interpreted as widely as possible. In other words, proposals do not need to explicitly address theology in specific geographical regions. Rather, the conference is soliciting proposals for papers (which could be in any theological discipline) that are of relevance for the worldwide church.

I myself proposed a paper on Genesis 2-3 (I think that’s of global significance).

The Call for Papers, with information about word length, where to send proposals, etc., can be downloaded here.

Graduate students, post-docs, and pre-tenured faculty are invited to submit finished papers by September 15 for the Jack and Phyllis Middleton Award for Excellence in Bible and Theology. Full rules for the theology award may be found on the CETA website. 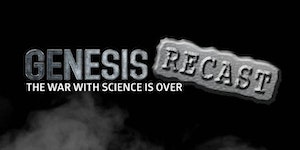 For too long Christians in North America have thought the Bible was in conflict with biological evolution. Yet many orthodox Christian theologians of the nineteenth century (including Charles Hodge and B. B. Warfield) saw no conflict in principle.

The Manufactured “War” between Science and Religion

This famous “war” of science and religion (of which the creation-evolution battle is the most prominent example) is a relatively recent invention, manufactured from the atheist side by John William Draper (History of the Conflict Between Religion and Science, 1874) and by Andrew Dickson White (A History of the Warfare of Science with Theology in Christendom, 1896), and on the Christian side by fundamentalists who misread the Genesis creation accounts as scientific.

But this is a serious genre mistake. Many atheists treat “science” as a full-fledged worldview that claims to tell us that there is nothing to reality but the natural world and that the scientific method gives us all the valid knowledge there is. Likewise many Christians treat the Bible as a science textbook, when the point of creation accounts in the ancient world (of which Israel was a part) is to explain the meaning of life and how we are to live.

Of course, the issues are a bit more complex than that. But to find out more you will need to attend an important conference that is coming to the Buffalo, NY area on September 18-19, 2015.

Genesis Recast—The War with Science Is Over

This is the provocative name of the conference, which will headline John Walton, Old Testament professor from Wheaton College, on how the read the Genesis creation accounts. His orthodox Christian faith in connection with his expertise in the Bible and the ancient Near East admirably equips him to guide us in how the interpret the Genesis creation accounts in line with their original intent. 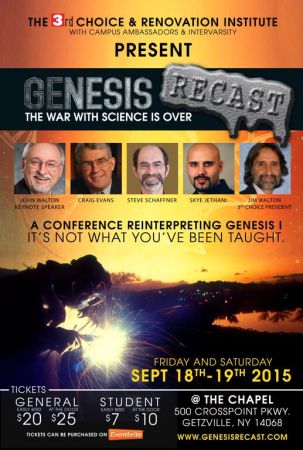 Of course, we need to go well beyond a declaration of “peace” between the Bible and science.

The Positive Role of a Biblical View of Creation

The biblical view of creation claims that the cosmos is “very good” (Gen 1:31) and is imbued with God’s wisdom and order (Prov 3:19-20). Indeed, the wisdom literature of the Bible encourages us to understand the world, in which God’s wisdom is embedded, that we might live better in it.

Furthermore, God’s creation of humanity in his own image, with the task to rule the earth (Gen 1:26-28) and tend the garden of creation (Gen 2:15), implies an exalted role for human beings, which includes the possibility of science. As stewards of earthly life, we are commissioned with a vocation that encompasses (but is not limited to) the scientific understanding of the world in which we live.

Not only can the world be studied scientifically, but a biblical view of God’s good creation suggests that human knowledge of the world (while not infallible) is possible and (when proper testing is in place) is reliable and trustworthy.

So far from being threatened by evolution, Christians who embrace a biblical understanding of creation may see the hand of God in the deep time of the cosmos and the complex processes of biological evolution. In fact, we may be in awe of the amazing creativity of this great God of ours.

Does this mean that we’ve solved all problems of how theology and the Bible relate to what we are learning about the cosmos and the evolution of life on this planet? By no means. I myself am working on these issues and have lots of questions. But whoever said that we would have all the answers, especially within our lifetime?

Expecting all the answers now is a decidedly modern form of hubris.

Instead, Christians need to learn the virtue of patience, and to take a long view of things. If we trust in the God of creation, revealed supremely in Jesus Christ, the incarnate Word, we can learn to live with the unanswered questions we have—indeed, to love the questions, as Rilke suggested, until that day when we live into the answers.

While John Walton is the keynote speaker for the Buffalo conference, there are other speakers, addressing issues relating to the New Testament, genetics, and implications for the church. You can find details about the other speakers on the conference website, as well as in my previous post on the subject.

Registration is so cheap as to be ridiculous. If you live within driving distance, there is no excuse not to go, since a conference of this caliber won’t come this way again in a long while.

I hope to see you there!

If you need flyers (4×6) or posters (13×19) for your church or organization, let the conference organizer know [iyouthguy@gmail.com], and he will send them to you.